In a previous blog post I examined how we could use the Git MSSCCI provider from PB Software in order to use GitHub as a source code provider for PowerBuilder.

In this blog post we're going to take that to the next step, in that we're going to create a build machine separate from our PowerBuilder development machine and then set it up to perform continuous integration.


The term "continuous integration" has a somewhat ambiguous definition, but generally it means that:
Ideally, automated testing routines would be run on each build to ensure that feedback on any functionality that was broken by the latest code changes are returned to the developers as soon as possible.  Automated testing is outside the scope of this particular article

Bonobo is a ASP.Net application, hence the need for the machine we're installing it on to have the .Net Framework installed and IIS configured for ASP.Net.  Installation is fairly straightforward, as all you need to do is:

The Jenkins install is also fairly straightforward as it uses a standard Windows installer.  After the install is complete it will generate a random password for the administrator into a file within the install and provide you with a message as to where to locate it.  You will need that password to do the initial login and configuration of Jenkins.

One you have started Jenkins it will prompt you as to the plugins you wish to install.  There are 1000+ plugins available for Jenkins.  The primary one we're interested in is the Git plugin, which is part of the default set of plugins that Jenkins will recommend for use. You can just accept their recommendations.

Autocompile has a fairly simple install too, and automatically adds the install directory to the system path.

Change the Jenkins URL from localhost to the actual name of the server that it's running on.

Create a Repository in Bononbo

You need to be logged in as the admin user to create a repository.  The only thing you have to provide is the name. 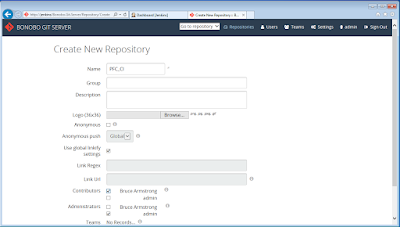 Once you're back at the list of repositories you can use the option there to copy the url for the new repository to the clipboard. 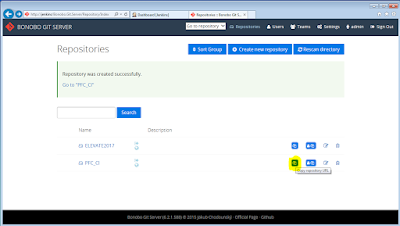 Configure the PowerBuilder IDE to use the new repository 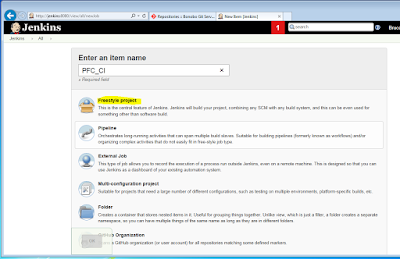 Under the Source Code Management section of the new project, select Git and then provide the repository URL and credentials to connect to the Git server. Under the Build Triggers, specify any automatic build triggers you want to use.  For this example, I'm going to use "Poll SCM" and configure it to poll every 15 minutes. 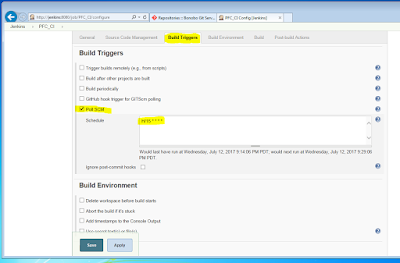 Do a "Build Now" on the project 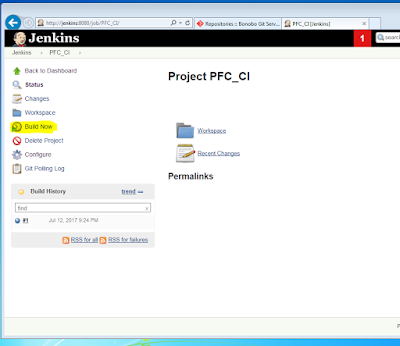 Because we haven't created any build steps yet this won't build anything yet.  What it will do is create a workspace under C:\Program Files (x86)\Jenkins\workspace and populate it with the current source code from the Git repository.

Create an ORCAScript file to create PBLs from the source code (createpbls.orca): 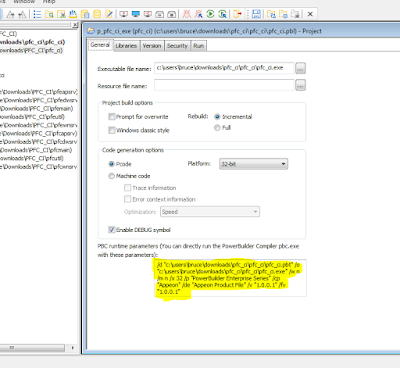 Using those arguments - modified slightly because we're deploying in a different location - we should have something like this (run_pbc.cmd):


Finally, create a batch file that will copy the generated exe and pbd files into another directory when the build is complete (copyfiles.cmd).


This batch files uses environment variables that Jenkins makes available when the batch file is run to create a separate directory for each build.

Go back into the Jenkins project and under Build add a Build Step that executes a batch command. 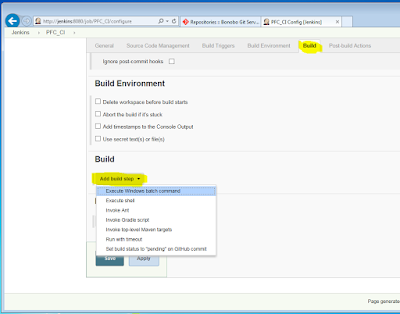 Specify the run_orcascript.cmd file as the first batch file to run. 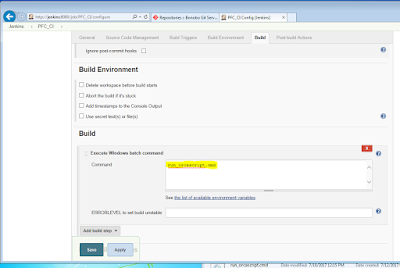 
Do a Build Now on the project

We're going to test out our scripts to make sure that Jenkins can do the build.  Once you've scheduled a build you should see it being processed in the list of builds. 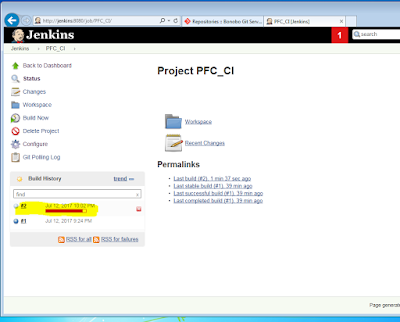 If you click on the build, you'll be taken to another page with more details, including the ability to view the console output from the running build. 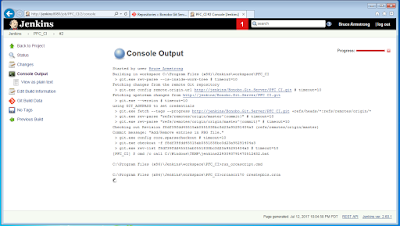 Now that we know the build works, let's see if we actually have continuous integration.  Go back into PowerBuilder and check out an object.  Make a trivial change and commit it.  Then using TortoiseGit, push that change to the Bonoho repository.  Now watch Jenkins and what you should see is that some time after Bonoho has been updated (depending on what you set the SCM polling time to in Jenkins) Jenkins will automatically launch a build of the project.

That gives us the basics of a continuous integration setup.  I'm going to be looking at taking it a bit further.  In particular.

Posted by Bruce Armstrong at 9:58 AM

You need some git server. I just used Bonobo for this demonstration. You can use any Git server (including GitHub) that you want.

Thanks for the input again..

What I am looking for is , if we have any way to connect Jenkins to Git Repository (Online Repository on git.com) without installing the Git Server.

I was trying to do that but unfortunately its not working.

I am doing it via PB125 instead of PB170.
But Jenkins does not seems to be moving on this step it just keep loading and do not show anything.I could not see any failure as well on the console output of jenkins.
any suggestion on this ?

The PBC170 that I'm using in the demonstration is a new feature of PowerBuilder that was introduced with 2017. PB 12.5 doesn't have that feature.

You would need to either:

b) Use PowerGen to do the compile.

I tried to use the PB command line feature for the compilation but this does not seems to be working or may be I am doing something wrong here.
I tried with ORCA script then and it worked for me in Jenkins.
I am able to perform the build and open work space using CMD but it opens the PB only and then ask me to enter the information to run the EXE project.
Via Jenkins it keeps on loading and does not seems to go anywhere so I had to stop the build in Jenkins.

Do you have any sample script for the PB125 CMD for Jenkins.

The command line arguments are documented in the help. Here's a link to the PBL Peeper changes to PowerBuilder that show the most important ones:

For example, assuming there is an application project in the this target, the following would launch the PowerBuilder IDE and deploy the app using that target.

Do you know any tool to write test script for PowerBuilder and those can be used in Jenkins and can record the output.
I am looking to automate the PB testing for UI application written in PB.
Let me know in case you have any information on this.

That's a real good question for the Appeon Community: https://community.appeon.com/home

I was able to manage to create build using Jenkins based on this blog.
But suddenly it stopped working with the below error:
C:\Program Files (x86)\Jenkins\workspace\benchmark>run_orcascript.cmd

I have the Licensed version of PowerBuilder and I am able to run the same scripts outside of Jenkins but it does not working through Jenkins.
Any input on this will be helpful.

All I can suggest is doing the standard Sysam license debugging.

The is what I am getting in the log file:

I am understanding here how I can configure the license to use the PB125GA.
Any suggestion?

Hi Bruce,
We are setting up our PB project in git and I m trying to build using your jenkins tutorial.

I was wondering since with new Appeon Powerbuilder git support.Powerbuilder exports the source files to ws_objects folder however the target file doesnt get updated.

I m facing issue with orac script which builds pbls off the source files which are in ws_objects.

Please advise if there is any extra modifications I need to do to my orca script.

Hi Bruce, I tried installing Orcascript plugin in jenkins. i am using powerbuilder 2019. The error i am getting on jenkins is that it says orcascr170.exe does not exists. i have given the path for orcascr190 but it is throwing error for 170.

Hi Bruce, i am trying to build the pbl from jenkins. i am using powerbuilder 2019. i installed the orcascript plugin and pbc plugin. the auto compiler installation gave orcascr190 and pbc190. while building the job, i am getting error saying orcascr170 does not exists. can you help on this?

The plugin would need to be updated to call orcascr190 rather and orcascr170. The source code is available on the Github site.

Our company is looking to do CI with our PB applications and GitLab and Jenkins.

We would like to know if we can freely use your OrcaScript, and PBCompile plug-ins for our CI effort?

Absolutely, its open source. However, you may want to look at the new AutoBuild feature in PowerBuilder 2021. It pretty much eliminates the needs for the plugins. You can just call it directly from Jenkins: