In an article on the enhancements that were added to the stand alone compiler in R2, I remarked on an issue on how file version information was handled in the initial release, and which was still a problem in R2.  Fortunately, R3 corrects that issue.  In R3, there are now two additional command line arguments: 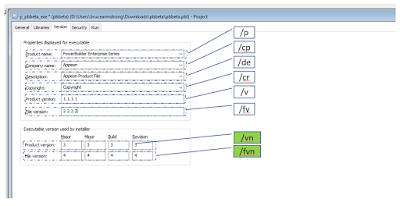 Since the compiler no longer attempts to use the /fv argument for the numeric only file version information in the "Executable version used by installer" section, it is now possible to use non-numeric values for it.  That wasn't possible earlier.

The addition of the /vn argument allows the product version in the "Executable version used by installer" section, something that wasn't possible using the command line compiler previously.

There was another issue with the initial and R2 versions of the stand alone compiler that I didn't cover in my prior article.  Those versions of the compiler could crash on very large project with an "Application Not Responding" error.  I believe this was because the compiler, even though is was running as a command line executable, was still operating on a UI thread.  When it was compiling a very large project, it could end up not refreshing the UI thread frequently enough, and Windows would eventually mark it as a non-responding app.  That was corrected in a post R2 bug fix which is incorporated in the R3 release.

With that, and these changes to correct the file version issues, 2017 R3 has addressed all the know issues with the compiler that I'm aware of.