This was the second time that Appeon had hosted a PowerBuilder user conference on their own, and once again I thought it went extremely well, even better than the prior year.  As with the prior year, attendance was good and quite diverse.

The conference was held in the Sheraton Philadelphia Society Hill Hotel.  As it is a hotel and in a popular area with a number of other hotels nearby, there was no need for Appeon to provide transportation to and from the conference location as was required last year.

The meeting area was divided into four sections as highlighted in orange below:  A&B (A1, A2 and B all combined), C, D and E (E1 and E2 combined).  The keynotes were given in A&B and sessions were running concurrently in A&B, C, D and E.  Breakfasts were provided in the Ballroom Foyer and lunches in the Hamilton Room. 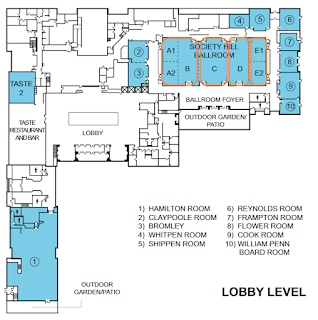 I really liked the location of this hotel.  Normally the view out of a conference center hotel is such that you leave the windows closed.  This was my view however. 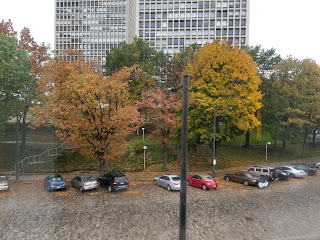 And this was the view from the roof of the parking garage next door where I parked my rental car. 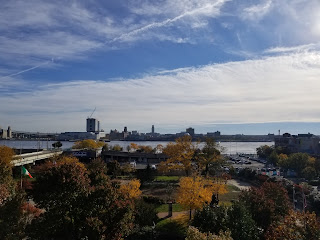 Because the hotel was located in the "Old City" it was within walking distance of quite a number of historical locations to visit such as the Betsy Ross House, Elfreths Alley (the oldest continuously populated neighborhood in America, dating to 1702), Christ Church and its burial ground as well as a few more recent landmarks such as Rodin's The Thinker (one of numerous casts) and the Rocky Statue.  Mike Searer (who lives in the area and helped Appeon with organizing the conference) took several of us on a walking tour of the city on two nights of the conference.  In addition, the South Philly Striders running group took some people with them running too, including a wed evening run over the Ben Franklin bridge. 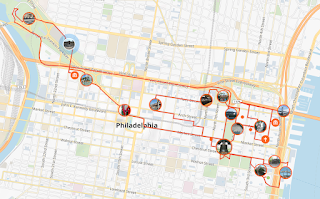 This year you could register for the event the evening before the conference actually began.  In either case though, registration was smooth.  I really like the ID badges they provided this year.  It was enclosed in a case, which provided for a better-quality feel than the plastic sleeves they used last year. 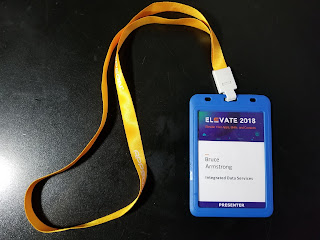 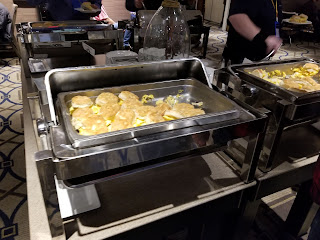 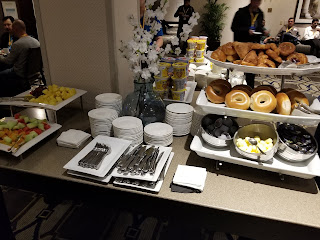 Armeen Mazda (Appeon CEO) did the first presentation.  He discussed Appeon's plans to grow the developer base with the enhancements added in PowerBuilder 2018.  Specifically, Armeen claimed that Appeon has brought the productivity of PowerBuilder to C# development and has put forward a strategy to attract new C# developers to the toolset.  The PowerBuilder 2018 Cloud Edition will include:
The new version will allow for


He also covered some of the new features that will be available for client/server application development in PB 2018 including an OAuth server, the ability to use and create custom themes, new controls (in 2018 R3) and a better implementation of dockable windows (in 2018 R3).

Chris Pollach (Appeon Director of Developer Relations) then did a quick demonstration of many of the new features that were added in PowerBuilder 2017 R2/R3. 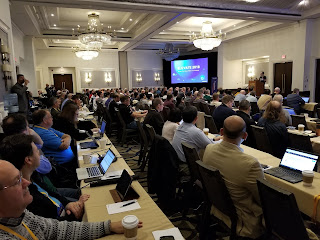 Bryan Enochs (Principal System Engineer/VP of Business Relations, AT&T) talked about their Client Invoice Services (CIS) application and how they were able to make some minor changes across the app to deliver a mobile-enabled version within a few months.  Because of the success of that effort, they've decided to take the same approach with another large-scale app called the Integrated Billing System.

Julie Jiang (Appeon Product Manager) then spoke about the roadmap for PowerBuilder, including the following release schedule:

She also announced that conference attendees would be sent an email to provide them with access to the Insider Release of PowerBuilder 2018 on November 30, 2018.

Enhancements planned for the initial 2018 release were listed as:

Enhancements scheduled for the 2018 R2/R3 releases included:
There was also some indication that the list of planned enhancements is not complete for those revisions and others may be added "based on your feedback".

The planned enhancements for PowerServer 2018 were also covered, including:

Sync updates from PowerBuilder
Latest environment support
John Qi (Appeon CTO) then spoke.  He covered cloud native applications, the difference between monolithic and microservice apps and why we would want to move to that architecture.  He then discussed the enhancements that will be included in various future versions of PowerBuilder to make it easier to build cloud apps for such a native architecture.  Appeon made the claim that such early focus on this area would put PowerBuilder in a position where PowerBuilder would once again be ahead of the curve, and other tools would playing catch up with PowerBuilder in the future. 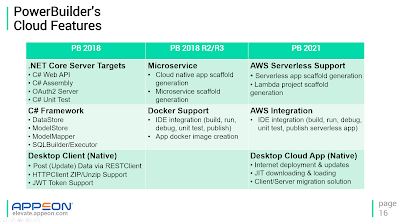 Finally, Govinda Lopez (Appeon Tech Support) demonstrated some of the new features that would be included in PowerBuilder 2018.  In particular, the C# enhancements, which had three use cases:

This year there wasn't one, or at least I was unaware of one.  I really didn't need it though.  I just filled up my Google calendar with the sessions I was doing and their location.  Then for the empty spots I had to fill I found it was trivial to just hit the conference website from a mobile device and filter down to what was available at that time.  I did manage to catch part of "C# Jump Start for PowerBuilder Developers" by Michael Kramer Tuesday morning and "DataStore, ModelStore and ModelMapper - Main Differences and Use Case Scenarios" by Govinda Lopez on Wednesday morning.   I also attended the "Roundtable discussion of PowerBuilder 2018 New Features" session put on by Appeon during the last hour of the conference Wednesday afternoon.

Lunch was much different than last year.  This was buffet style with much more options and better seating.  The choices varied from day to day as well.  No complaints here. 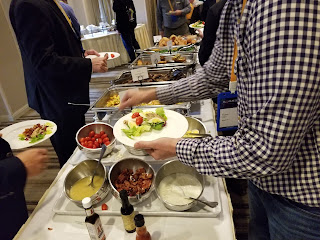 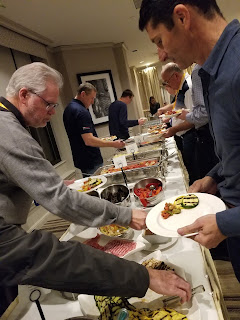 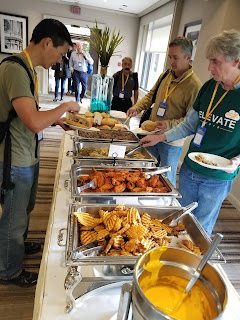 Unlike last year, this year's facilities were, for the most part, adequate so that everybody could find a seat during sessions.  No standing room only and people standing outside the door as we had for some sessions last year.  The only time I thought the seating was a bit tight was during the keynote.  There were also power hubs (both 110 and USB) available in the attendee seating locations.

For the most part, I didn't experience breaks.  That may be my own fault.  When we submitted our proposals for our sessions we were asked if we wanted a 45 or 60-minute slot.  And for the most part the sessions slots were laid on an hourly basis, so you'd have 15 minutes for a break after a 45-minute session.  My problem is that a number of my sessions did take the full 60 minutes, and I would find myself simply picking up my laptop and gear and running (or at least walking fast) to the next room where I was due to start my next session.  However, the few times I did see a break I was happy to see somewhat healthier options available for the snacks. 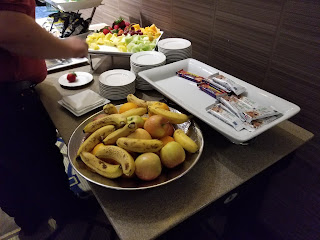 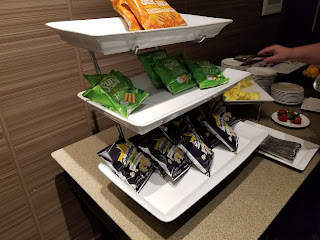 The special event was held at Buffalo Billiards, which in addition to billiards featured shuffleboards and darts as well.  Wasn't the real grand event that we've seen in some prior conferences, but then I really didn't miss that either.  It provided a setting with free food and drink and an opportunity to chat with friends old and new.  I found I liked that more than waiting in line for a long time to do some activity I wasn't all that excited to be doing anyway.  Because I had some finishing touches to add to one of the sessions I was giving the next morning, I ended up leaving after the food was served, but I talked to a number of people who stayed until the place closed. 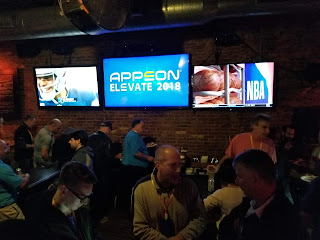 During the last hour of the conference Appeon hosted a "Roundtable Discussion of PowerBuilder 2018 New Features".  There was a somewhat similar session last year hosted by John Hnat of Foundation Software that was targeted towards ISVs.  This one was run by Appeon and wasn't targeted to any specific sub group of the user community.

As with last year's session, it wasn't so much a roundtable as it was the presenter asking specific questions to gain feedback on each of the new features planned for the coming release. 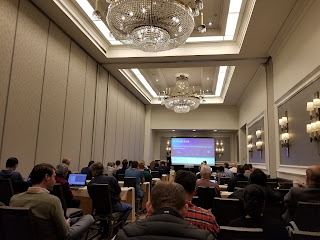 Suggestions for next year

Different city, but a similar setup to this.  (Nothing wrong with Philadelphia, but I'd like to see a different city each year).  Find an interesting city and find a spot in or near numerous hotels that are also within walking distance of interesting locations to visit during non-conference hours.  One thing I noticed this year was that there were a number of first-time attendees from the northeastern US who were able to drive in and hadn't attended last year because of the distance.  I think moving the conference around a bit helps different people attend who wouldn't be able to attend if it was at the same location each year.  That being said, I would suggest keeping the conference in the mid to eastern United States.  Firstly, because my understanding is that within the US that’s where the majority of PowerBuilder users are at.  And secondly, because it keeps the travel time/distance reasonable for the attendees coming from Europe.  The travel/time difference probably isn’t significant for those coming from Latin or South America, and it’s long no matter where you locate it for the people coming from the Asia.

Provide wireless microphones for presenters like myself that like to walk around a bit when we present.

On one occasion I had a session I was doing start late because the presenter before me ran significantly over their allotted time.  Might need to have staff give presenters warnings 10 minutes before their session ends that they need to wrap up and then follow up at the session end time to ensure they did.

Have the enhancements session during a session slot of its own, rather than running it concurrently with other sessions.  Otherwise people are forced to make a hard choice and you don't get feedback from as many people as possible

Posted by Bruce Armstrong at 12:30 PM

Thanks a lot for the detailed review of the conference.