Arrived in Haiti at 9 AM after 9 hours of flying (including layover).  Went directly to the compound at Blanchard and rested for a bit.  One of the first thing I notice is that they've sealed the windows in the guest rooms with plastic and have installed mini-split (ductless) air conditioners.

A bit later that day I start on my first project.  One of the guest rooms is rather large.  It has two A/C units, each to cool half the room.  It's a bit of waste when smaller teams come down, or mixed gender teams and only one gender can stay in the room.  So, we're adding a wall to split the room in half.  If a smaller team comes down, they can stay in one of the smaller rooms now and the other half doesn't have to have the air conditioner running.  If a mixed gender team comes down, each gender has one of the smaller rooms to themselves.

This year they have a small LED TV set and a DVD player in the break area, so that night a few of us watched a movie and one of the staff popped some popcorn.

Continuing to work on the wall in the large guest room.  We got half the framing up Monday (this it what it looked like at the beginning of the day).

And this is what it looked by at the end of the day.  We got plywood and trip up on one side.  We need to get insulation from one of the other sites and install it before we can complete the other side.

While waiting for the insulation to be available I'm starting on my second, third and fourth projects.

On a side note, in an earlier trip I noted that playground equipment had been installed at the three different sites.  In the last couple of years I haven't been around any of the campuses when the children were using it though.  For example, last year I spend almost all of the trip at a remote site building a house.  Well, since this year I spent almost all my time at the Blanchard campus, I did get to see it in use, and it is well used.

A bit of a break.  Took a tour of the Rhum Barbancourt factory.

We also stopped by the high school that HOM has under development.  When I was here last year they were working on the first floor.  At the time I was visiting this year they have finished the second floor and were about to start on the third.

They expect to have it finished in time to be able to start holding classes in it for the 2015-2016 school year.  This is just the first of what will be numerous building at the site.

Then back to the campus to finish up the wifi setup.

I'd noted last year that they had started working on a new kitchen area with gas fired stoves rather than the charcoal fires they had been using.  Well, it's done and in use.

I also noted last year that the government was well on the way to having the road in front of the high school done.  At that time they had leveled it and were working on the storm drains on either side of the road.  This year, the storm drains are covered, and the road has been paved.

I've completed the wifi setup except for one access point that is in a room that I can't get access to right away (the school), so I'm looking for a fifth project.  I find it painting some of the walls in one of the guest rooms.  This is what it looked like before I started:

And what it looked like when I was done:

A bit later in the day I finally got access to the last access point and completed the wifi configuration.

Generally we don't do any project work on Sundays.  First thing is church.  Here I with one of the children from the orphanage, while one of the staff tries to help me sing in French.  Haitian hymnals just give the French or Creole words, it doesn't show the tune at all. 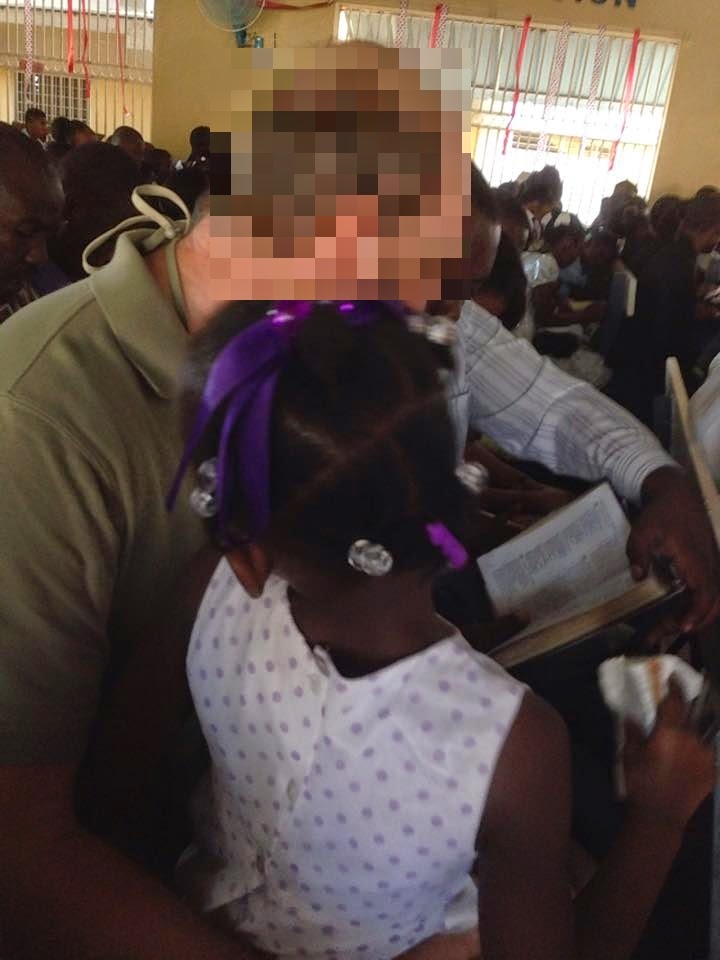 After church they usually take the visiting team out for some sight-seeing.  Given that this is my fourth trip, I've already seen most of the local sights.  Also given that I'm a one person team this trip, I asked if I could do something a bit different.  Specifically visiting Lake Azuei (Etang Saumatre) near the border with the Dominican Republic.  Like it's twin Lake Enriquillo in the Dominican Republic or the more well know Dead Sea in Israel the lake has no outlet and as a result is a salt lake.  While Lake Enriquillo is saltier than the ocean, Lake Azuei has fresh water to the east and reaches only about 11% salinity to the west.  Unlike the Dead Sea though, swimming is not recommended, particularly because it is a habitat for American crocodiles.  That's one of the biggest reasons that the area hasn't been developed, although I did find one company indicating that they were going to be building timeshares near it.

Since we were so close, we decided to head over to the Dominican Republic border crossing.

And then walked across the border to a market that included a restaurant where we had lunch.

Although the island was originally colonized by Spain, France later took over the part that became Haiti, which is why they speak Creole/French whereas they speak Spanish primarily in the Dominican Republic.  Because I live in an area that has strong Spanish influences, it felt rather like being at home to be in a restaurant that had Spanish language music playing in the background and offered Spanish dishes.

As I mentioned earlier, one the last things I did was some additional "train-the-trainer" computer training.

Not much to report here.  Headed to the airport for a 10:30 flight and 15 hours of flying (including layover).

A couple of changes that have been in the works for the last few year.

1.  The government has placed an emphasis in providing public schools.

2.  There is now a second international airport, one located at Cap-Haitien.  While it technically reopened after a 2 year reconstruction effort in February of 2013, it wasn't until October of 2014 that a major carrier (American) started operating flights to it.

Also, there has been quite a lot of protests going on against corruption in the government lately, including one just before I arrived that resulted in one death and the resignation of the prime minister.

Posted by Bruce Armstrong at 9:00 PM

Pictures not showing up in IE or Chrome.

And it's working fine for me.

The images are hosted on a different site, perhaps your firewall folks are blocking the indirect reference or don't like that site.