As with Elevate 2020, it was online (and free) in 2021.  Given the way that COVID mutates, they're currently planning on doing Elevate 2022 virtual as well.

Once again the registration was done through the Appeon website.  I'm still waiting for the option to select several sessions and get a single ICS file for all the sessions.  Minor inconvenience.  It occurred to me this year that I'd also like to be able to see all the available sessions in a calendar format to help me pick and choose between sessions that are running concurrently.  Also not a biggie, just a convenience.

Armeen Mazda discussed PowerBuilder in a Post Pandemic Future, where he talked about how PowerServer enables PowerBuilder apps to be moved in a more modern, more flexible architecture. He also stressed that enhancements are in the works for customers who will be sticking with a client/server approach.

PowerServer 2022 will include a debugger and an update to .Net Core 5.x, but you can get started today with PowerBuilder 2021. 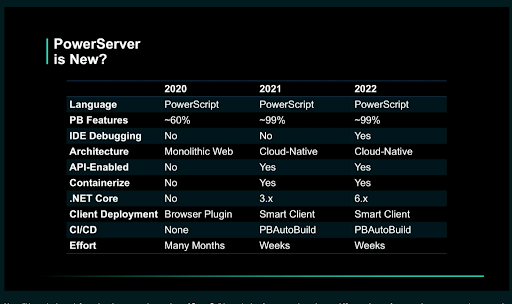 Mark Wensel of United Insurance Group then discussed how they moved their InsurPAS application to a cloud native app in a few weeks. 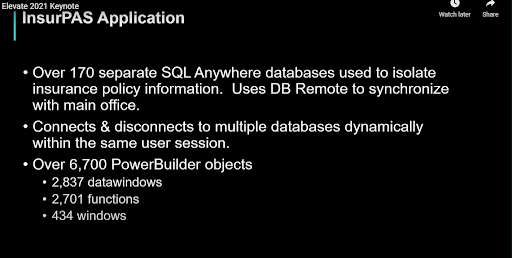 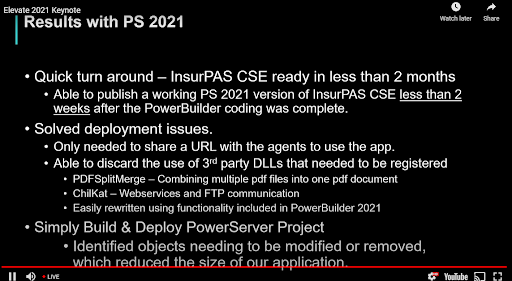 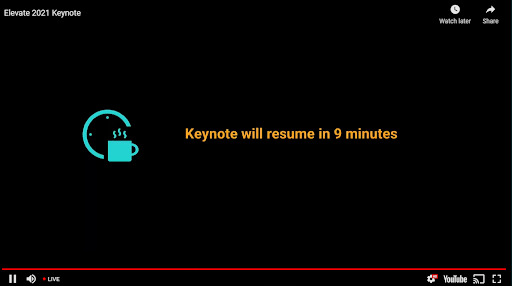 Julie Jiang then discussed the PowerBuilder roadmap.  Next major version after 2022 will be either 2024 or 2025. 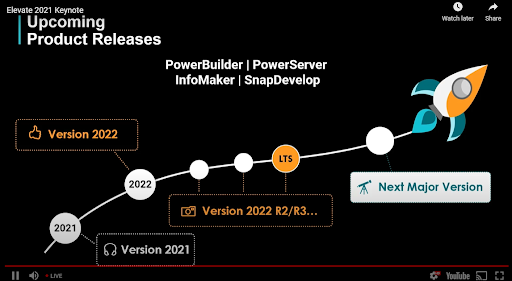 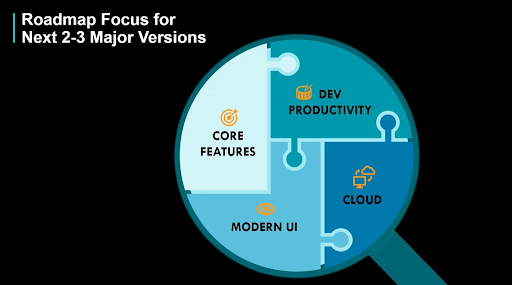 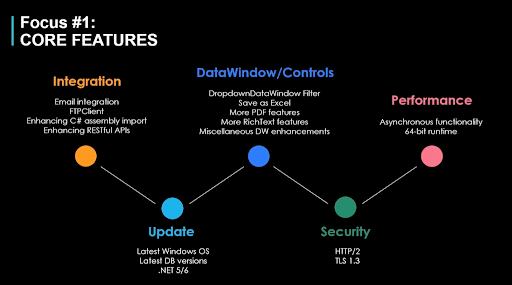 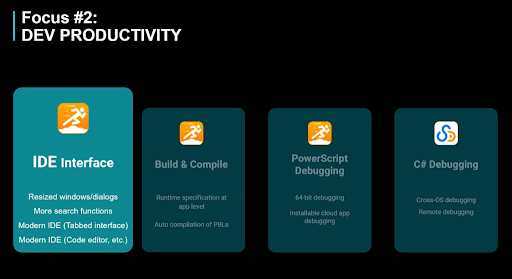 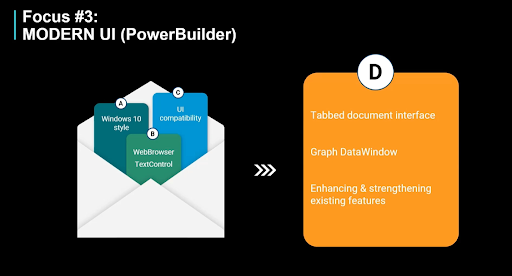 For Snap Develop, Modern UI enhancements include support for other UI technologies, including React, Angular, etc. 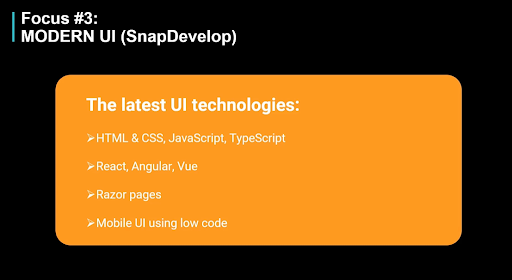 In the Cloud category, enhancements include faster performance and unified debugging as well as support for Kubernetes. 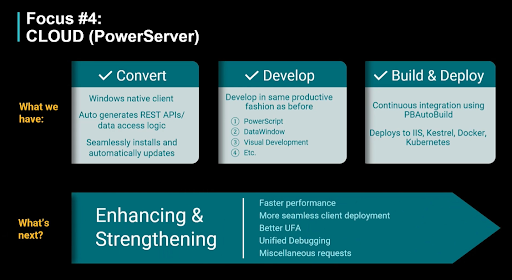 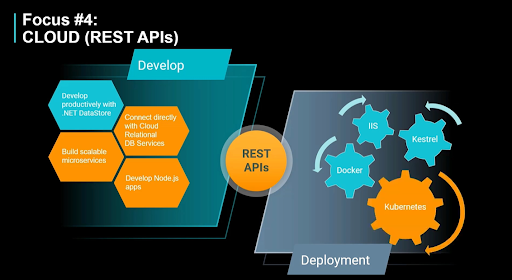 Julie then discussed some of the results of their recent survey of PowerBuilder customers.  She later indicated that they would be doing this on an annual basis. 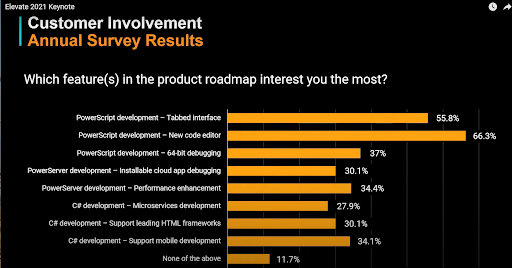 Chris Pollach then did a sneak peak of PowerBuilder 2022.  He demoed the new tabbed interface, the resizable dialogs, regular expressions in the search. the jump option and debugging deployed PowerServer code. 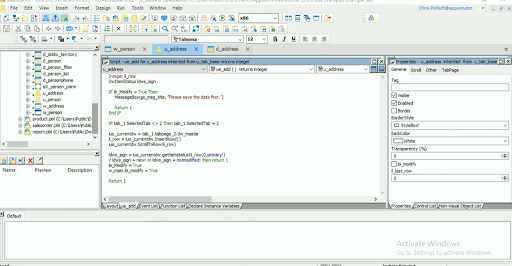 Jianxin Zhang of Dou Yee International Pte Ltd discussed how they migrated a legacy ERP application to the cloud.  They deployed to Azure App Service on Linux, which was half the cost of deploying to Windows in the Azure environment. 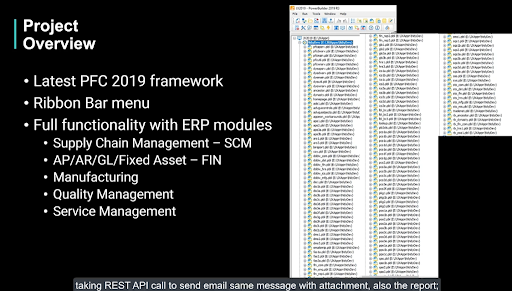 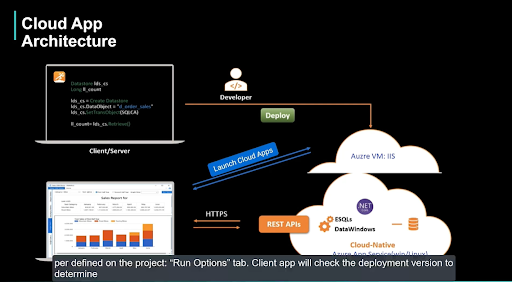 Finally, there was a Question and Answer session based on questions that were pre-collected during the registration process. 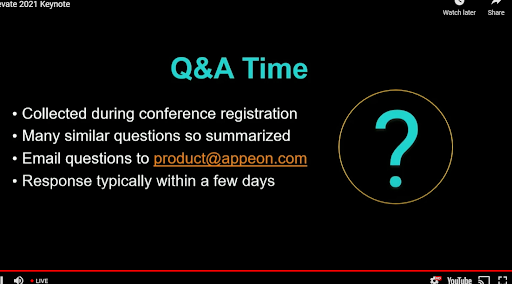 After the keynote rhere was a 30 minute break before the 1 hour Chat Cafe, but many of us headed over there early and started chatting. 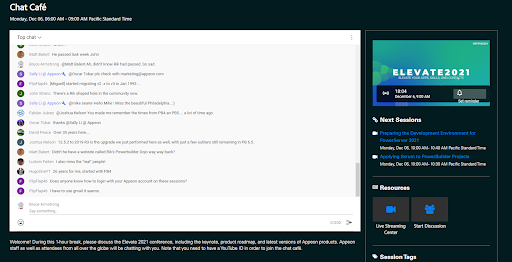 After that the conference broke into two session tracks, one for PowerServer and one for PowerScript/C# development.  I attended a presentation on "Applying Scrum to PowerBuilder Projects" by Gian Luca of Enable Development.  It was largely an tutorial on what Scrum was and really didn't get much into the details on how to apply it though.  Next (for me) was "Themifying a Mature PowerBuilder Application: Aging Gracefully in a New Skin" by Ronnie Po of Morpheon.  That was followed by "Google Maps - Places API" by Kevin Ridley Aomega Solutions LLC.  Both sessions were excellent and really dived into the details.

All of the breakout sessions included a 10 minute Q&A chat afterwards.  The slides and sample code (if any) were also immediately available from the resources area of the page. 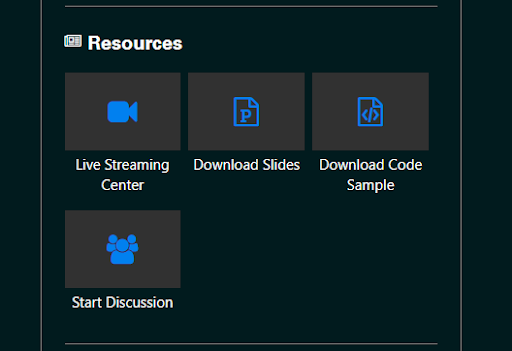 Next up was "Creating Build and Release Pipelines Using OrcaScript in Azure DevOps" by Miller Rhodes of Intertech Consulting.  Quite interesting, as I hadn't gotten that far into Azure yet.  His samples were based on OrcaScript and the PBC compiler.  The new AutoBuild option in PowerBuilder 2021 should make it even simplier.  I then watched as much of "Step by Step: Migrating PowerScript Functionality to a RESTful Web API to Store/Read Compressed PDF Documents" by Alex Riofrio of DORA Sistemas as I could.  The issue is that my first session as a presenter started about 10 minutes before the end of Alex's session.  My first (and only) session as a presenter for Monday was "PowerServer 2021: Adapting Database Logins".  Then it was off to watch "Data Visualization Using the PowerBuilder Datawindow Control" by Buck Woolley of Dw-eXtreme.  He demoed a graphical network editor he created.  As always, I'm blown away with what he's able to do with a DataWindow. 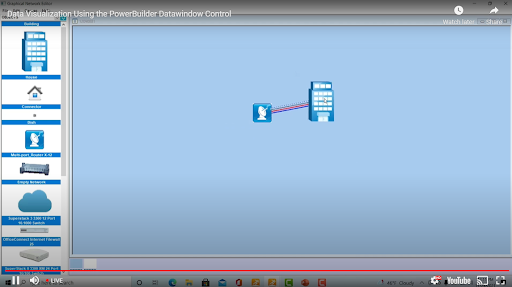 That was my last live session of the day, but I went back and watched a replay of the "PFC 'Lite' - Stripping Down the PFC" session my Matthew Balent of Concentra.  That one ran concurrent with the session I was presenting, so I wasn't able to watch it live.  What's great about the Youtube streaming is that the sessions are available on Youtube immediately after they end.  For the keynotes I was able to see the chat that occurred during the live session as well, but that doesn't seem to be enabled for the breakout sessions.
Continued in Day 2
Posted by Bruce Armstrong at 3:00 PM