This is the second year that the North Carolina PowerBuilder User Group has held a large user conference.  I wasn't able to make the event last year, so I can't compare how well this year went compared to last year's.


I really liked Charlotte as a location for the event.  The downtown Charlotte area appears to be quite lively and relatively safe during non-conference hours.  I did notice that there were a lot of private security guard outside of office building and a noticeable police presence.  There was actually a shooting in the area on the second evening of the conference.  However, although there were a number of homeless people in downtown proper, I never felt unsafe.

We didn't have an official conference hotel, and the event was held at the University of North Carolina Charlotte City Center facilities.  I rather liked that setup as it kept me out of the hotel and the walks to and from the conference facility were pleasant.  The only downside was that there was construction taking place near the conference facility and so we were required to walk some distance out of our ways to get around it.

The one downside is that there didn't seem to be much to do sightseeing wise.  At least not compared to locations like Washington, D.C. or Los Angeles.  The biggest thing in the area is the NASCAR museum, but I'm not much of a NASCAR fan.


Registration was a breeze, which might have been influenced by the fact that I was a presenter and known to the folks hosting the conference.


Matt Balent spoke first, welcoming everyone to the conference and outlining how the conference would run.  I followed him with a demo of the new features of PowerBuilder 12.6.  That was followed by Armeen Mazda discussing new features in Appeon and Christophe Dufourmantelle discussing new features in Visual Export and Reporting Studio.  Partway through the general session we needed to relocate from the auditorium to one of the classrooms because another group had the auditorium booked at that time.  It was a bit inconvenient, because there wasn't enough seating in the classroom for all the attendees.


We had a variety of boxed lunches to choose from and could then return to a classroom or just hang out to eat them.


I had three sessions I presented in the afternoon:
I did manage to get in one session by someone else though:  Zeenyx AscentialTest Demonstration by Brian Le Suer.

Appeon hosted the attendees at the Rock Bottom Wednesday evening.  There were quite a few snacks as well as drinks, so I managed to stay until the end.

Breakfast was the typical continental breakfast setup.  Anticipating that, I stopped by a Starbucks on the walk to the facility and provided for my own.

My first session on Thursday morning was a particularly interesting one by Heino Hellmers on Reporting by using Report Definition Language (RDL) from Microsoft.  That was followed by HANA and PowerBuilder 12.6-The Solution Mix by John Strano.  Song Li was then supposed to do Tips & Tricks for Building Mobile Apps in PB but for some reason Armeen Mazda ended up doing it.  Finally for the morning there was POS Application in the Cloud with Appeon by Fili Sosa.

Once again, a boxed lunch.

My first afternoon session was Tips and Tricks and Ideas for building new GUI features in your PoweBuilder Classic Application by Franck Fasolin. Then I did my last presentation of the conference:  Using PowerBuilder Non-Visual Assemblies in Visual Studio.Net.  Finally for the morning I attended Roll Your Own JSON Parser by Matt Balent.

See my notes from Thursday

For the morning we reverted back to a general session format in the auditorium.  The first item on the agenda was the thing that was of most interest to all of the attendees:  Moving Forward with SAP PowerBuilder by Dirk Boessmann.  I've covered the information provided during that session in a blog post on SCN.  That was followed by Off the Grid: Migrating Sometimes Connected PowerBuilder Apps with Appeon by Ryan Story and The ‘M’ Word in Test Automation by Brian Le Suer.

We returned to classrooms in the afternoon.  I only had one more session that day:  C Sharp Integration by Kyle Griffis

Overall, the conference went very well.  Of course, the news that Dirk Boessmann brought was well received by everyone.  I was impressed that a regional user group conference was able to draw attendees from 6 of the 7 continents (nobody came from Antarctica!) 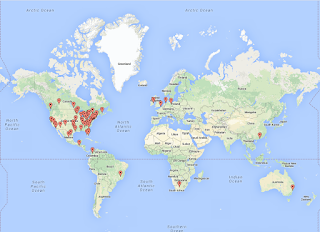 The facilities were excellent.  The audio/visual equipment was built into each room, and included a monitor that shows the presenter what the session attendees are seeing on the screen, so you don't have to turn around and look at the screen when you're doing code examples.  Every seat in the classrooms and every seat in the auditorium had a power outlet.

I've mentioned the box lunches, but that shouldn't be taken as derogatory.  I found them quite acceptable.  I'd recommend doing something different for breakfast though in future events.

I would be concerned about how much longer this particular facility would be able to handle the event.  The classrooms were pretty full (there were three tracks running simultaneously) and the auditorium was pretty full during general sessions.  As mentioned before, when we had to move to a classroom for part of the first day's general session, it got quite crowded.  We only used classrooms on one floor of the facility, and as I understand it there are 8 floors of classrooms in the 12 story building.  So it's possible they might have additional tracks in additional classrooms during technical sessions to split up the load.  I just don't know how many more people they can fit in the auditorium.  (The facility brochure says 300).

The other thing I'd like to see are more technical sessions from "end-users".  By my count, 16 of the sessions were done by vendor representatives.  Another 9 were done by somebody that promotes a code framework and many of the sessions were about that framework.  There were 17 others like mine by "pure" end users.  Of course it's better than SAP dCode (formerly TechEd) where close to 100% of the sessions are done by SAP.  It's not that vendor sessions are bad. it can just feel like marketing at times, and I find I often get more out of an 'end-user' session than I do from a vendor presentation.


Posted by Bruce Armstrong at 2:31 PM