Our flight doesn't leave until 9:30 PM or so, so we figure we'll leave at about 4:30 PM, giving us more than enough time to get to LAX by 6:30 PM, the 3 hour before flight time that American Airlines wants us there.  Of course, about 9AM we start hearing about the shooting at LAX.  For a while the airport is closed.  The airport opens a few hours later, but all of the roads leading into it are still closed.  People landing at LAX have to walk a couple of miles outside of the facility to get picked up, and people coming in have to walk in from several miles out.

That afternoon we leave for LAX assuming that we may have to walk in.  I'm monitoring traffic on Google Maps as we go, and shortly before we get to the airport they open up the entrance to LAX via Century Blvd, but Nash remains closed.  So we cut over to Century Blvd and start the crawl into LAX.  We actually do manage to make it in by 6:30, and out flight leave as scheduled.

I hadn't entered my Global Entry/Trusted Traveler information into the American Airlines site yet, so my boarding pass didn't print out with TSA-Pre on it.  Which turned out to be a good thing.  Luis' did, and so he got sent over to the TSA-Pre line, which was actually longer than the regular line.  Mark and I had to wait for him.

Arrive Miami at 5:30 AM and catch our flight to Haiti at 7:30 AM, arriving in Haiti at 9:30 AM.  Usual mob at the airport wanting to help us with our luggage.  As in past trips, I ignored them and proceeded to the vehicle waiting for us.  However, this time one of the people managed to rip one of my bags out of my hands when I was about half way there.  Did tip him $5 as it was the smallest thing I had, which is roughly the minimum wage for an entire 8 hour day in Haiti.

We get a tour of the Blanchard facility.  A playground has been put in.  They had to show the children at the school there how to use it, as they'd never seen playground equipment before. 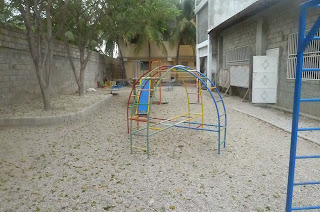 They also showed us the kitchen, where they are converting the stoves over to run on natural gas.  Up to this point, all the cooking has been done over charcoal. 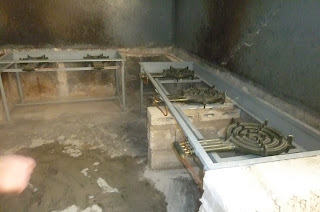 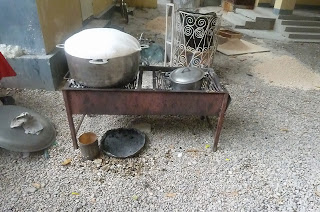 Good news for teams staying at the Blanchard compound, they've screened in the dining area. 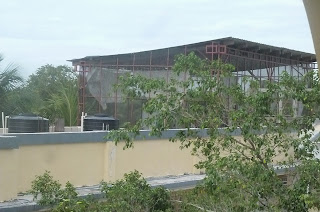 They also had a van donated to them, which has A/C in all but the last set of seats.  I actually didn't like riding in it.  I like the open tap-taps where I can interact with people in the streets.  Makes you feel a part of what is going on.  Sitting in an air conditioned van with tinted windows makes me feel cut off from the people. 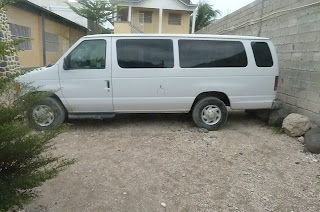 In the afternoon the other team arrived from North Carolina.  We visited the downtown area, including a museum of Haitian history, but no photographs were allowed there.  The national palace had been torn down by the time I visited last year.  The national cathedral has been sealed off so you can't get inside of it anymore. 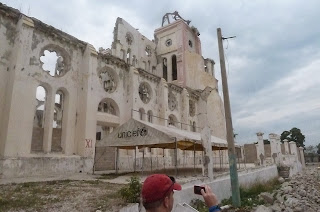 We decided to attend a portion of each of the services at the three facilities:  Blanchard, Citi Solie and Repatriot, starting with the Blanchard facility at 5:30 AM.  Despite the early hour (or because of it) the service was packed.  It was packed at all three facilities.  In particular at Repatriot, where the service we attended was the first service held in the reconstructed sanctuary.  Until that morning, the church had been meeting in a tent since the earthquake destroyed their old sanctuary. 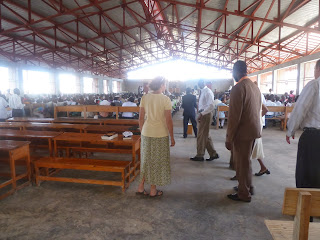 There were so many people there that they had to bring in desks from the school and put them in the back of the church so that we could have a place to sit.

Lots of progress at the Repatriot site.  They have a soccer field now.  The goal posts weren't up yet, as the field wasn't being dedicated until the week after we left. 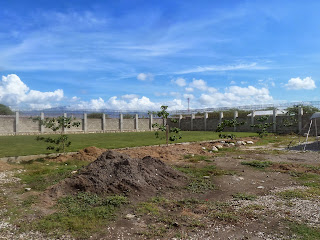 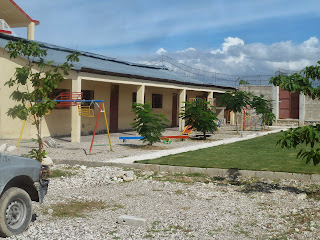 And they've completed the construction of the second of the three interconnected school buildings and have it in use (you see both of them here). 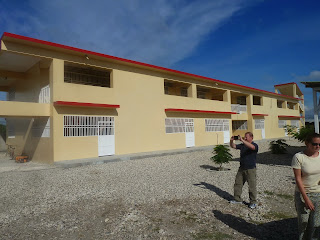 Next stop is Mirebalais, which is in the mountains about 60 miles Northwest of Port-au-Prince.

The main thing we're going there to see is a teaching hospital, but first we make a bit of a side detour to a waterfall just past town. 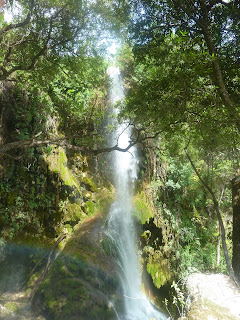 After that, back to the hospital. 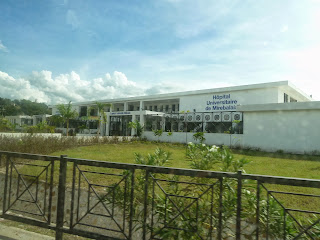 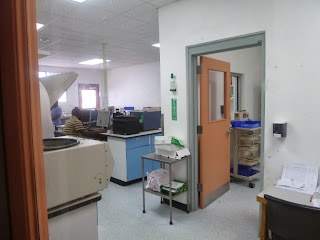 First day on the job site.  We're building a house for one of the deacons of the Repatriot church.

On the way out to the job site we stop by the high school that Haiti Outreach Ministries is building.  More signs of progress in that the road in front of the school, which to date has always been a dirt road (although it's a major street) with ditches on each side is now having storm sewers installed on each side after which the road will be paved.  At the site for the high school they have the perimeter fence installed (always the first thing to eliminate squatters) and have started work on the first building. 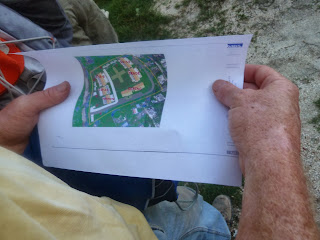 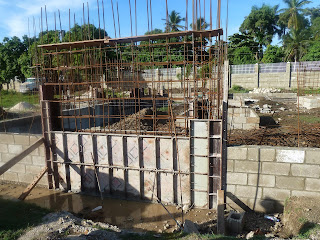 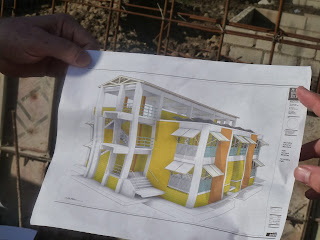 Then it's on to the job site.

It's been raining every evening so far (and continued to for the remainder of the trip).  However, this was the first (and only) day we got rain while we were at the job site.  At one point during the downpour Mark decided to go join a group of boys who had started up a soccer game in a nearby field. 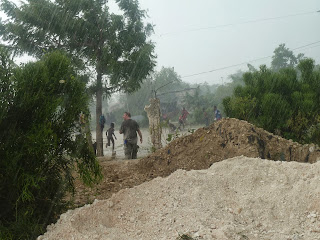 Perhaps the soccer game in the middle of a rain storm wasn't such a good idea, because Mark is sick now and spends the day at the compound resting.  We believe it's actually something he picked up from a fellow passenger on the flight down.  We did manage to find some cough and cold medicine in clinic at the Blanchard facility for him.

Our first stop on our way out to the job site is an orphanage that HOM runs.  Right now they have 11 girls at the facility.  They have one building up so far and are planning a second.  At one point they were thinking of having boys in the first building as well, but then decided to wait for the second building.   At some point later, they realized it would probably be a better idea to have the boys at a separate facility. 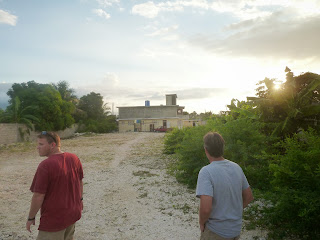 Note that although it's called an "orphanage", the children have at least one parent that HOM knows of and a birth certificate.  It's not that the children don't have parents, but that the parent(s) have surrendered the children because they can't properly care for them.  So they are raised in the orphanage, but the parent(s) are allowed, in fact encouraged, to visit their children.  A number of parents don't though.

We also stop off at the Repatriot facility to show it to those who haven't seen it yet. 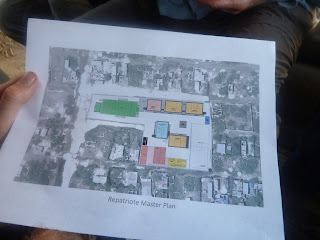 We're also there to visit one of my sponsored children.  When I first sponsored them they were both attending school at the Citi Solie facility.  However, they both moved to the school at the Repatriot facility since then.  At this point, we didn't realize both were there, so I only visited with one.

Next stop was the work site.

Mark has rejoined the living now, and the first order of business was for him to meet his sponsored child, who attends school right there in the compound at Blanchard. 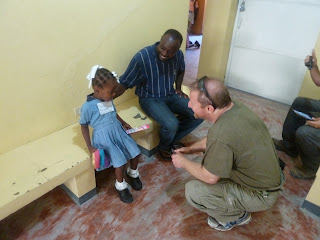 We then went to the Citi Solie facility.  The church which other team that is down here with is from sponsor two entire classrooms of children that the school here, so they got to meet their classrooms.


Then we took a tour of the clinic at Citi Solie. 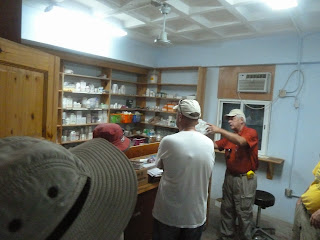 Then its back to the work site.  The clip for the tactical camera I was using to film at the website broke, so I don't have any video from the job site for today.  By the end of the day, we've just about completed everything except the installation of the sheet metal roof.  The other team is returning home tomorrow morning, but Mark, Luis and I will come back to the site tomorrow to help finish that up.

First stop off on our way to the work site is the Repatriot facility again.  They've figured out that both of my sponsored girls (sisters) are there.  So I get a chance to visit with both of them now. 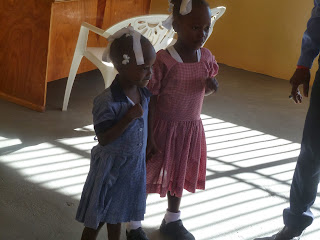 Then we head off to the work site and help put on the roof. 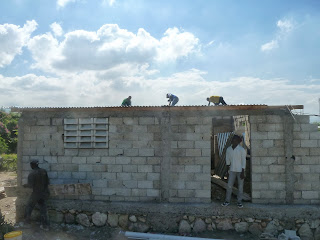 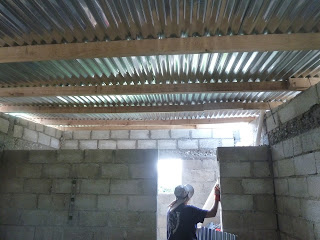 That only takes up until noon, and there isn't that much more we can do at the site for the remainder of the day, so we head back to the Blanchard compound.  Since we are staying through Saturday, we had talked to HOM about doing some painting in the kitchen area on Saturday.  However since we've finished early we asked if we could start on Friday afternoon instead, but the kitchen was in use.  We end up taking a nap instead.  At dinner, we talk with some of the HOM staff and they suggest that on Saturday we visit the orphanage run by the Missionaries of Charity (Mother's Teresa/s outfit) for malnourished children.

First stop is the orphanage run by HOM.  Since Mark was sick when we originally visited it this gives him a chance to see it.


Then we head off to the Missionaries of Charity orphanage.  No photographs were allowed inside.  Like the HOM facility, there are parents who are encourage to visit.  Some do not though.   There are quite a number of kids here from infants still in cribs through older children.  I didn't make it past the infants.  If a parent doesn't come in during visiting hours to hold the child, the child won't be held all day.  So most of these kids are desperate for somebody to come in and pick them up.  I held one little girl almost the entire time we were there. 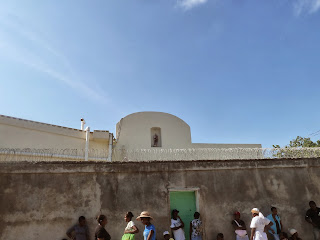 On the way back to the Blanchard compound we stop by a local hole in the wall restaurant to pick up lunch to go. 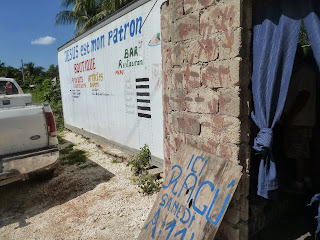 And that was pretty much the end of the trip.  We had some trouble getting back home, but that's covered in another blog post.

Posted by Bruce Armstrong at 2:12 PM

Email ThisBlogThis!Share to TwitterShare to FacebookShare to Pinterest
Labels: Haiti 2013